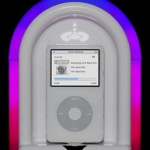 The Pressure Drop JukeDock is an iPod dock, that provides audio/visual outputs, USB connection to a PC, and various modes for its LED lights.  One of the lighting modes the  JukeDock may be set to simulates the rising rainbow of light made famous by jukeboxes of the 50’s and 60’s. Design challenges in this project included electronics packaging (the design ended up using two pcbs, one horizontal down low and another vertical in the center of the product on which the LEDs were soldered, as well as the LED control logic), and sourcing a translucent, light-scattering material to use on the sides to eliminate the hot spots of light created by the LEDs, while passing as much light through as possible.

The Pressure Drop PaperHub hides a four pot USB hub and five port FireWire hub in a beautiful, sleek aluminum sheetmetal enclosure. All the cables are hidden at the rear, and the whole device operates from a single power supply to decrease cable clutter. Perhaps the largest challenge with this project was how to take the original designer’s concept and figure out how to produce it in sheetmetal in low volumes. The end result was manufacturable without any custom tooling and no second ops other than hardware installation and anodizing. 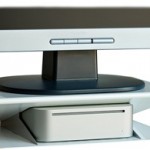 A Mac Mini computer will fit perfectly inside this monitor stand for Pressure Drop, while the USB/FireWire hub at the rear helps supplement the Mac Mini’s extreme lack of ports. The biggest challenge with this design was to develop something that not only fit the original industrial design, but was able to support CRT monitors up to fifty pounds. All that in a design that was inexpensive to produce using common sheetmetal manufacturing methods. I still use mine around my office as a monitor stand, even without a mac mini underneath. 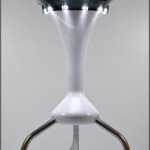 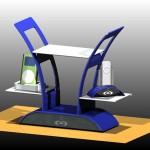 The Pressure Drop TrestleHub takes a USB and FireWire hub, and hides it in the base of a multi-tiered shelving system. It’s designed to be a place for gadget freaks to put all their cell phones, PDAs, iPods, etc, reducing the clutter on their desks as well as providing a place to show off their beloved gadgets. This patented design was completed and prototyped, but has not been manufactured. 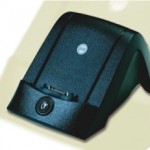 My involvement with this cradle design was the mechanical design of the plastic parts (the industrial design and surfacing was done by someone else), and working with the connector supplier on this new design of connector. 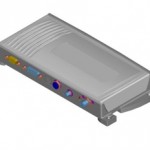 The Trimble Navigation Crosscheck, a combination GPS/cellular telephone for vehicle tracking applications.  This was back in the days of AMPS cell technology, and it used a ton of power!  That made it a fun thermal design challenge, as well as a fun EMI/RFI challenge requiring localized shielding on the PCB. 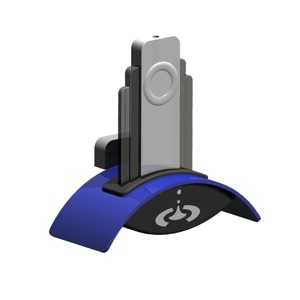 The Pressure Drop DecoDock was an eye-catching docking cradle for the Apple iPod Shuffle (first generation), designed for high volume offshore production. Key features are the handy storage features for the iPod’s cap at the rear of the dock, and the columns on either side of the iPod that are lit up by white LEDs below to give the whole product an Art-Deco look. A single arced piece of sheetmetal provided not only mass for stability, but also an easy way for customization and variants by merely specifying a different powder paint to be used on that part. This made it easy to introduce six colors for production.